In a world full of criticism, is everyone really a “critic”?

It would certainly appear so, as today’s society is increasingly being governed by the thoughts and opinions of social media users, whose influence on the arts and entertainment, we see every hour of every day.

If you merely search the name of the latest Beyoncé album or the 2016 Emmy Awards that aired last Sunday evening, your feed will instantly be diluted by critical commentary from all types of voices, especially from those of amateur critics.

Deggans, who dedicates his reviews to shows like the “Emmys”, “The People vs. O.J. Simpson: American Crime Story” and NBC’s latest series, “Pitch”, attempts to provide the public with insightful and knowledgable critiques that separate quality art from the rest, amidst the distracting noise and clutter of today’s realm of “criticism”.

“Most critics start with one basic question,” Deggans said. “Does this art move me or not, and why? Depending on what you feel, answering those questions will lead to great stories.”

According to the critic, the “Why?” provokes critiques that are led into different avenues, whether they be about politics, race, gender or the economy, critics have the ability to relate such large societal issues to the ways in which they are expressed and portrayed in their discipline.

This is where Deggans shines in his reviews as well as through his book, “Race-Baiter”, in which he discusses and criticizes the way the modern media cultivates fears, hate and prejudices.

“You can write about anything when you write about television,” he said. “Consumerism, social change, racial issues, etc.”

The same is true for criticism of the fashion industry.

Fashion criticism can largely be led into similar avenues to that of television, as an art form representative of the morals, values, economic status and general state of society at any given time.

However, it is merely the greatest critics in the discipline that take their critiques to a level beyond most tweets, Facebook statuses and Instagram comments. It is those who place fashion in the larger context of society.

Deggans singled out Pulitzer Prize Winner Robin Givhan, as one critic who does just that.

“Robin Givhan, on the one hand, has a very astute way of describing what trends are in as well as telling stories about how fashion is reflected in other aspects of life like in politics and in the news,” Deggans said.

With a simple scroll through Givhan’s section of The Washington Post, this statement could not be better reflected. 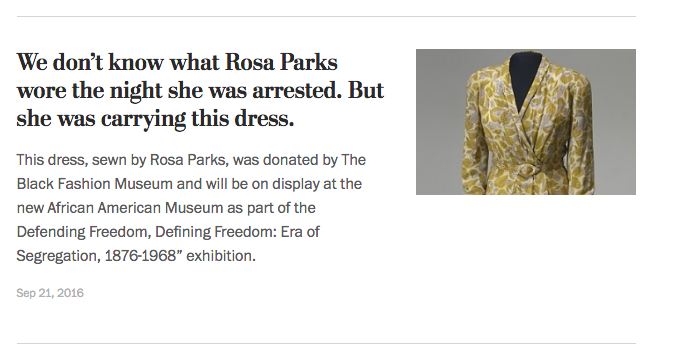 In one of her latest pieces regarding the controversy over Marc Jacobs use of dreadlocks in his Spring 2017 show at New York Fashion Week, Givhan weighs in on the cultural and political uproar among many critics on Twitter, who believe Jacobs’ decision to send white models down the runway in dreadlocks, was a cause of cultural appropriation.

The critic deemed the outrage “ridiculous”, as the artist’s clothing and set did not suggest any disrespect of black culture or its connection to black people, black politics, or black struggle. Instead, Givhan suggested that the peach, pink and lavender colored dreadlocks looked as though they landed on the model’s heads from Mars.

“He took artistic license with a hairstyle that has seen multiple iterations and riffed on it yet again. Jacobs was riffing on a riff. He put it on a runway, shoved it into a fashion dialogue that, yes, because of his stature and success, he leads,” Givhan said. “But to argue that he has somehow been disrespectful or oblivious, suggests that certain pieces of culture should be untouchable and that’s a dangerous argument.“

And that is an exact example of the point critic, Eric Deggans, made when talking to aspiring-journalists at Rutgers University.

Today, everyone has the ability to be a critic. However, to be a great critic, you must elevate the critiques of your discipline by bringing it into the context of the world at large. Perhaps, even to the context of Mars.